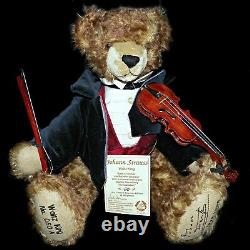 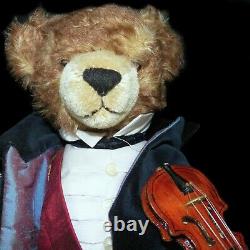 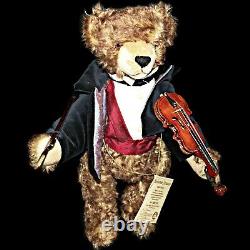 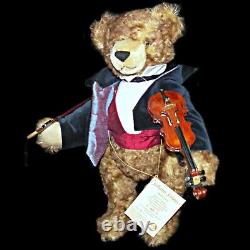 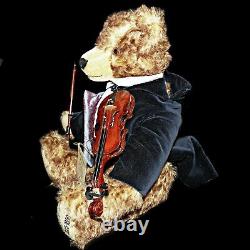 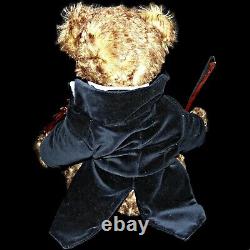 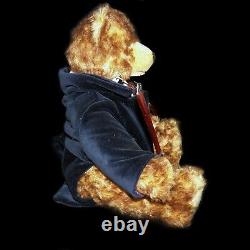 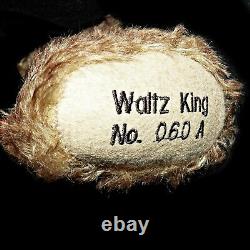 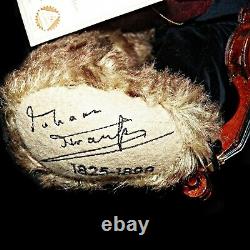 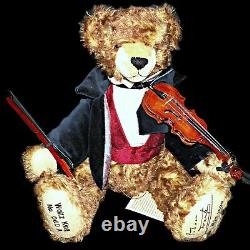 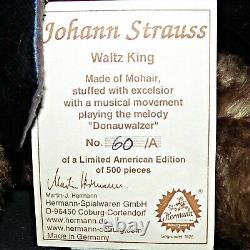 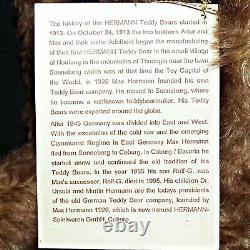 Hermann The Waltz King Johann Strauss Limited Edition Musical 60 / 500 Mohair Teddy Bear. Released in 1999, this stunning Teddy Bear from Hermann Spielwaren is a special Composer's Series released to commemorate 100 years since the composer Johann Strauss' death in 1899. He is made from finest brown tipped mohair, is filled with excelsior wood shavings and his wind-up music box plays, "Donauwalzer" or "The Blue Danube Waltz".

Each of the composer edition bears have their own unique number with the limited edition quantity and play the composer's signature composition. This bear is number 60 in an edition of 500 American pieces total.

This bear comes with his own perfectly scaled wooden violin and bow and stands 15.75 inches tall. He is dressed in velvet and real silk formal apparel. If you are a fan of Strauss', waltzes, operettas, and preludes then you are going to love this bearish fellow! Johann Strauss II (October 25, 1825 - June 3, 1899), was also known as Johann Strauss Jr.

And was an Austrian composer of light music, particularly dance music and operettas. He composed over 500 waltzes, polkas, quadrilles, and other types of dance music, as well as several operettas and a ballet. In his lifetime, he was known as "The Waltz King", and was largely then responsible for the popularity of the waltz in Vienna during the 19th century. Some of Johann Strauss's most famous works include "The Blue Danube", "Kaiser-Walzer" (Emperor Waltz), "Tales from the Vienna Woods", and the "Tritsch-Tratsch-Polka". Among his operettas, Die Fledermaus and Der Zigeunerbaron are the best known.

Today the company is based in Coburg and is run by his grandchildren, Dr Ursula and Martin Hermann. In the cultural year of 1999, the city of Coburg honored the famous composer Johann Strauss, who became a citizen of Coburg in 1887.

The Hermann Teddy Bear Company joined in contributing to this special event by designing the Johann Strauss bear, which pays homage to the 100th anniversary of the Waltz King's death. The new Johann Strauss bear is very special because he plays the most beautiful and famous waltz written by Johann Strauss, "The Blue Danube", warming the hearts of bear friends all over the world. Hermann Teddy Bears are stuffed with excelsior which are only rarely offered on the collector's market today. What used to be the standard of collectible Teddy Bear makers, has become a valuable and rare treasure today.

Worldwide there are only a handful of experts who are still familiar with the traditonal art of excelsior stuffing. Years of training, technique, and an artistic sense for styling are necessary to carry out this very time consuming work.

Only long established Teddy Bear manufacturers still have the knowledge of to stuff Teddy Bears with excelsior making these bears increasingly difficult for collectors to find. This gives Hermann Teddy Bears their exceptional value and makes them to uncomparable and unique creatures with character and enhanced value. Stuffed with Classic Excelsior Stuffing. Handmade by Highly Skilled Experts. Musical Wind Up Movement plays "The Blue Danube".

Legs and the Head are Movable. Certificate of Authenticity Around Neck. #60 in Limited Edition of 500 American Pieces.

Made in Germany - Hergestellt in Deutschland. This item is in the category "Dolls & Bears\Bears, Clothing & Accessories\Bears".

The seller is "aqhatrailrider" and is located in this country: US. This item can be shipped worldwide.