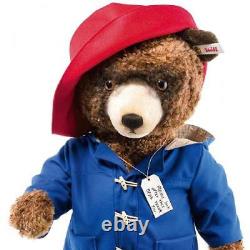 December 24th 1956, Michael Bond was against the hustle and bustle of last minute Christmas shoppers, who just like him, were in the process of searching for the perfect gift. Later they named the Teddy Bear Paddington, as they themselves lived nearby to the station. This was just the start of something special. In 1958 his first book "A Bear Called Paddington" was published. A little bear from Darkest Peru, sent by his Aunt Lucy to England with a suitcase full of marmalade and a polite, straight to the point label, Please look after this Bear.

He was discovered looking lost and alone at Paddington Station by Mr Brown and subsequently, was'adopted' by Mr and Mrs Brown who took him under their wing, inviting him to their home to live amongst them, their children and Mrs Bird, the house keeper. This was the beginning of many adventures surrounding the curious little bear from Peru. He has appeared in animation, a tv series and now film.

2017 sees the second Paddington Bear cinema release, using the magic of CGI to bring a tamed, wild bear into madcap society. This fabulous rendition from Steiff, is the Life - Size version depicted in the film and continues the iconic look created for him. Paddington is 106cm tall and three-way jointed (arms and head). He has been sewn from a decadent, curly chestnut mohair with a contrasting cream muzzle and cocoa ears.

He has two tone brown, safety eyes, with a hand stitched cocoa nose and mouth, whilst delicate airbrush shading has bought depth and detail, bringing life to his beloved character. Now for the details - he wears a red bush hat (from Peru) and a blue duffle coat (from the Browns), with two front pockets and three wooden toggles as fasteners. He hood has been lined with a beige based tartan (the same as in the film and the same as all Steiff Paddington's released since 2014). He also wears the famous "Please look after this bear" label around his neck. Now down to the suitcase.

His faux leather case has corner protectors and a "wanted on voyage" sticker incorporated into the design, with a working handle and slide latch. Within the suitcase the most valuable of commodities... A jar of marmalade (glass jar with faux marmalade and cotton top), alongside a faux plush and wool felt marmalade sandwich. This magical heirloom is a spectacular, UK and North American Exclusive Limited Edition of just 350 pieces. His importance of being Paddington and the recent passing of the late Michael Bond, have made this Limited Edition exceptionally sort after.

He will come with his numbered certificate of authenticity and boxed for his journey to you. "I'm a very rare sort of bear", said Paddington There aren't many left of us where I come from. Suitable for collectors only, This is NOT a toy. The item "Steiff Life Size Paddington Bear Limited Edition (UK Delivery Only) EAN 690365" is in sale since Tuesday, July 10, 2018. This item is in the category "Dolls & Bears\Bears, Clothing & Accessories\Bears".

The seller is "worldofbears" and is located in taunton. This item can be shipped to United Kingdom.